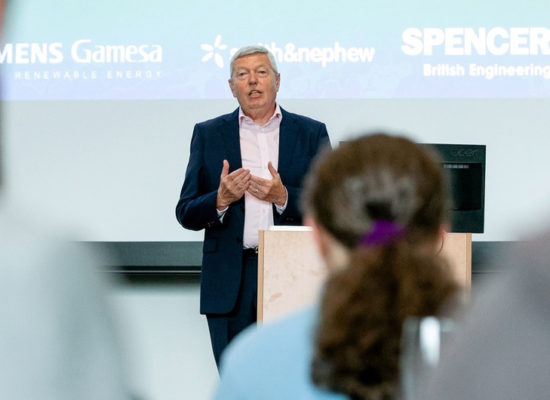 Former Education Secretary Alan Johnson has hailed Ron Dearing University Technical College (UTC) as one of the best schools of its kind in the country and paid tribute to its outstanding students.

Mr Johnson, who is Ron Dearing UTC’s Patron, was speaking as students and their parents gathered with teaching staff to celebrate another superb year of achievement for the employer-led school and its talented learners.

The former West Hull and Hessle MP was speaking at the school’s Celebration of Achievement Evening attended by scores of students who have excelled over the past year, together with their proud parents.

Mr Johnson said: “There are around 50 UTCs and I can tell you this is one of the best. Once we have gone through the Ofsted report process and gained our first exam results, I’m sure this will officially be what everyone already feels it is – the one of the best UTCs in the country.

“That’s because it’s had the best leadership, the best business engagement and it’s had great input from the parents but, most of all, because of the students.

“It makes all of us who dreamed of establishing a UTC in Hull so proud to see everything we hoped for become reality.”

Mr Johnson said establishing the UTC was one of the three best things to happen in Hull over the past five years, together with City of Culture and Siemens coming to the city.

He said learners and their parents had shown they were right to take a “leap in the dark” by opting to join the school when it was so new and told the students: “You’re a credit not just to education in Hull, but to education in this country.”

Students and parents also heard from Charlie Spencer OBE, the UTC’s Chair of Governors and Executive Chairman of Hull-based engineering business Spencer Group, one of the school’s Founding Partners.

Mr Spencer said that, as an entrepreneur, he was known as a calculated risk-taker and Ron Dearing UTC’s students had that in common with him.

“You’re risk-takers and ambitious too. When you take a risk and it goes wrong it can be absolutely horrible, but when you pull it off it’s fantastic,” he said.

“You decided what you wanted to do, you took a chance and you pulled it off. Now you’re prize winners, which is fabulous.”

Mr Spencer said the school had a palpable sense of “vibrancy, energy and confidence”, which was due to the leadership of Principal Sarah Pashley and her team.

Speaking on behalf of the University of Hull and the employer partners, he said: “Every single one of us is so proud and pleased to be associated with this place and with these students.”

Mrs Pashley responded by thanking the school’s Founding Partners and other employer sponsors for their invaluable contribution and added: “I really want to say a huge thank you to the staff. They are amazing and I love working with them.”

Kelham Hillier is congratulated by Professor Stephen Kelly on being named as winner of the University of Hull Award for Academic Excellence.

Among the successful students were 15-year-old Kelham Hillier, who claimed no less than six awards, including the University of Hull Award for Academic Excellence.

He said: “I didn’t expect to get this many awards – I would have been chuffed with one and I’m pretty overwhelmed. I feel so happy I made the decision to come here. It’s been really good for me and speeded up my learning.” 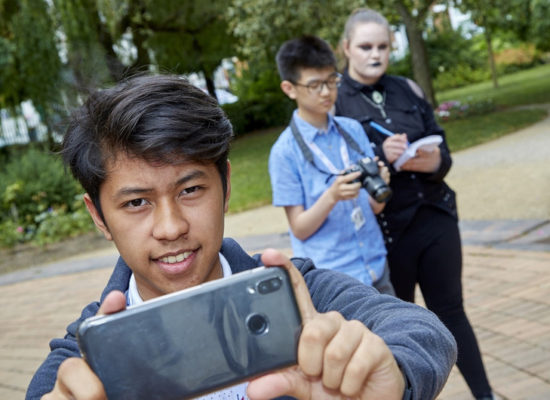 Tapi Ngoro enjoys his success with Alan Johnson after being presented with the Patron’s Award for Young Advocate of the Year.

Sixteen-year-old Tapi Ngoro received three awards, including The Patron’s Award for Young Advocate of the Year. He said: “This is unlike any other school because of the opportunities you get to work with the employer partners and the work experience that’s available.

“It gives you a real insight into industries you might want to work in. That’s been a real game-changer for me.”

The prizes awarded to dozens of students in recognition of their achievements over the past year.

Contribution to the Combined Cadet Force

Student of the Year Award

Student of the Year Award