Some of our top female tech talent have attended an inspiring and empowering “Lunch & Learn” session hosted by one of our Major Partners, leading technology company APD Communications.

The interactive session looked at the past achievements of female tech pioneers, including 19th century mathematician and visionary Ada Lovelace, known as “the prophet of the computer age”.

Keeley said: “It’s extremely important to encourage the next generation of women into tech careers because the proportion of females in this industry is still so small.

“Hull is a great area for growing talent and all the initiatives by companies such as APD and by Ron Dearing UTC give more hope and opportunity to students and graduates to go for a career in technology.

“These female students show how attitudes are changing. Hopefully they will be inspired to overcome gender stereotypes and progress into tech careers.”

Year 12 engineering student Ellie Clayton said: “I’m interested in working for Smith & Nephew or Siemens, who are both Ron Dearing UTC partners. They’re big companies and lots of people want to join them, but I think having high aspirations just helps you to work harder.

“I also used to want to work for the police but until today’s Lunch & Learn event with APD I didn’t realise there were so many tech jobs within the police service. It’s quite inspirational to see what we can do.”

Year 10 student Zoe Brown said: “Most jobs in tech are male dominated, so it’s important to see females in top roles in software companies. It shows girls they can get jobs in tech.”

Other topics covered in the lunchtime session included how gender bias can deter females from choosing careers in technology and how more role models were needed to encourage women into the tech roles.

The nine engineering, maths and computer science students then heard about how forward-thinking APD empowers its workforce regardless of gender, with many women in senior positions at the company.

Wendy Hiley said: “I’ve seen the roles of women in tech change over the years, so it’s really important for us to inspire the next generation of females into the industry.

“We’re always looking for new and exciting ideas from the next wave of talent, so we’re keen to continue to develop our links with schools like Ron Dearing UTC and universities.

“APD is such a forward-thinking company and we’re all so passionate about the work we do – which is literally saving lives through tech. Hopefully these sessions will inspire students to think of APD when they’re deciding on a career.” 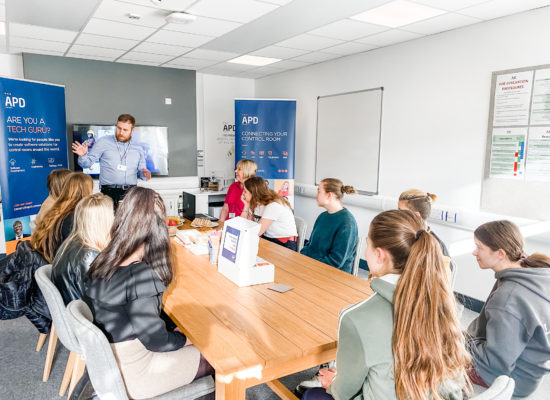