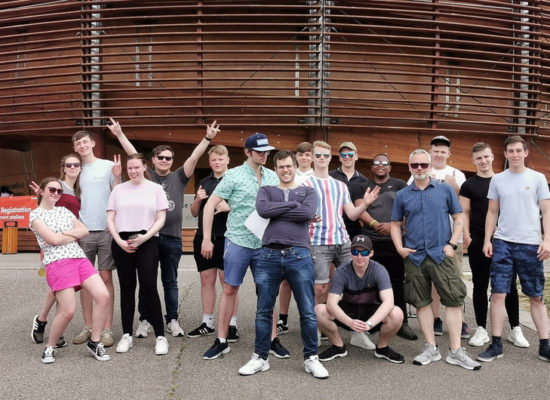 Sixth form students from Ron Dearing University Technical College (UTC) have travelled to Switzerland to visit one of the world’s leading centres for scientific research, to bring their physics studies to life.

Fifteen Year 12 and 13 physics students were the first students from the employer-led school to travel abroad on an educational visit, flying from Manchester to Geneva for the three-day trip.

The Ron Dearing UTC group outside CERN, home to the Large Hadron Collider (LHC), the largest particle physics laboratory in the world.

They visited the European Organisation for Nuclear Research, known as CERN, which operates the Large Hadron Collider (LHC), the largest particle physics laboratory in the world.

The LHC, which sits in a tunnel 100 metres underground at CERN, pushes protons or ions close to the speed of light and consists of a 27-kilometre ring of superconducting magnets with accelerating structures which boost the energy of the particles along the way.

Physicists and engineers at CERN probe the fundamental structure of the particles which make up the universe and do so using the world’s largest and most complex scientific instruments.

Students enjoyed an amazing learning experience at the European Organisation for Nuclear Research, known as CERN.

The Ron Dearing students also visited the United Nations (UN) offices in Geneva, where they had a guided tour of the building and found out about the history of the second largest of the four major UN sites.

In addition, they visited a human rights exhibition, as well as having a free day to explore the city and take in the sights, such as Lake Geneva, Natural History Museum, Science Museum and parks.

Our students outside the United Nations building in Geneva, the second largest of the four major UN sites.

He said: “The main purpose of the trip was to support the students’ physics studies and give them a wider understanding of the application of politics in the wider world with the visit to the UN.

“It gave the students an opportunity to see what they could aspire to become in the future and they were able to see how scientists collaborate internationally. Now we’re back, the students are learning more about particle physics and particle accelerators as a follow-up.

“I’d like to take the students, including some year 11s, to the European Space Operations Centre in Darmstadt, Germany, next year and alternate between there and CERN each year, so they can experience both.

“Trips like this give the students the opportunity to broaden their horizons and look at the opportunities science can bring them, not just as individuals, but in the wider world.”

Year 12 student Josh Stanley, 16, who would like to study electrical engineering at university, said the visit brought the world of science to life.

He said: “It was really interesting and great fun learning more about CERN, and going to the UN was the highlight for me because we were able to see a meeting taking place.

“I had heard of CERN before but never had the opportunity to visit. It made me realise how much we are willing to do in the name of science and I’d like to do a job which exists because of scientific advancements in the future.

“We really feel lucky – I don’t know of another school which offers experiences like this.”

Year 13 student Nathan Tennison, 18, hopes to study astrophysics at the University of Leeds, starting in September.

He said: “Geneva is a lovely city and CERN was really cool. I’ve always wanted to visit CERN and I studied particle accelerators for a year before the trip.

“The main thing I learnt was about the importance of magnets and helium, and it was great to see how everyone was united in the number one goal of finding out more about the energies of the universe.”