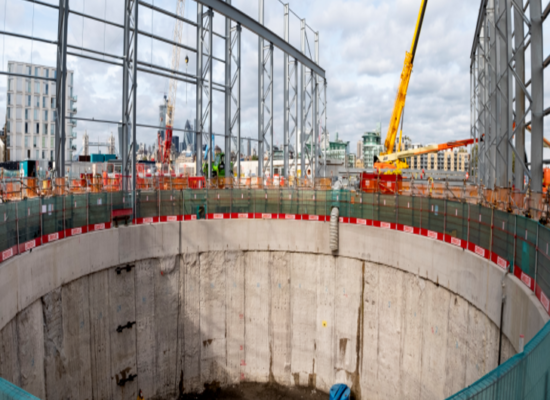 Students from Ron Dearing University Technical College (UTC) drew on their maths and engineering expertise to offer their take on a huge project to improve London’s sewerage system.

Slipform Engineering, a sister company of Spencer Group, one of the employer-led school’s Founding Partners, is one of the contractors working on the upgrade of the capital’s sewerage system, known as the Thames Tideway project.

London currently relies on a 150-year-old sewer system built for a population of less than half its current size, which results in millions of tonnes of untreated raw sewage spilling into the River Thames each year.

The Chambers Wharf shaft, one of the biggest access points as part of the London’s huge Thames Tideway project, which Ron Dearing UTC students have been learning about.

The Thames Tideway project, which is due to compete in 2024, involves building a 25 kilometre “super sewer” under the Thames to intercept the spills and clean up the river.

The new system transfers the waste below the river itself, rather than into the water, and a concrete column needs to be installed to the depth of the new drain, reinforced with a steel structure to redirect the sewerage.

The concrete structure is made by using a “slipforming rig”, which allows the continuous pouring of concrete into a moving form, creating a seamless structure.

To move the slipforming rig through the column, a series of hydraulic jacks are required at the top of the column and are anchored on support beams, known as a steel grillage. This needs to be strong enough to support the weight of the rig, ensuring it doesn’t bend and remains horizontal.

In one of the latest technically challenging projects set by Founding Partners at Ron Dearing UTC, Year 12 maths and engineering students were tasked with investigating the appropriateness of different structures for the steel grillage and designing a set of beams so the rig remained in place and didn’t slip.

Project members had to demonstrate their solutions using calculations and drawing detailed diagrams to back up their theories.

Dan Howard, Assistant Principal for Employer Engagement at Ron Dearing UTC, said: “The students found it fascinating to learn about such an enormous engineering project and enjoyed applying the skills they have developed to meet the challenges it poses.

“Projects like this bring maths and engineering out of the classroom and into the real world.”